Feature: The War for AI Talent Rages in China (Part 1)

Many believe AI-powered automation is likely to replace human workers and spell an end to the human race.

Before resulting in unemployment in large scale or bringing about a catastrophe, development in AI and the competition in the AI industry have brought AI engineers abundant job opportunities and decent salaries.

From big tech names to early-stage startups, companies need to chase after AI talent if they want to make the most out of this technological innovation, regardless of the cost.

This is the Part 1 out of the total three.

The day before the 2017 lunar New Year, Min Wanli got curious and checked his mailbox to see how many job offers he had received since January 2016.

What he saw shocked him. He found 700 job offer letters, an average of two per day. He had long been a target of headhunters, who had tried to reach him through every possible means from SMS and phone calls to emails.

“Sometimes I received several of them within a single day. I had the patience to reply them one by one at first, but grew tired over time,” said Min.

Min is an AI scientist at Alibaba Cloud. Talent like him is scarce and much sought after these days. Even the mid-level employees in his team are on headhunters’ lists and, since this April, the young staff with only two or three years of experience have been targeted as well.

The competition for fresh graduates during hiring seasons is just as intense, with companies playing all the cards they have, from attractive salaries to founders’ personal charisma to company tours.

After three interviews, one day morning, Du Xiao, a postgraduate in computer science from Tsinghua University, got the chance to talk to tech-focused VC firm Sinovation’s CEO Kai-fu Lee over WeChat.

“It was fun chatting with Lee. Since some candidates didn’t believe that he would actually talk to them himself, he even sent me a voice message to prove his identity at the beginning.”

“It’s really hard to hire talent this year. It takes a lot of back-and-forths before things can be finalized even with candidates fresh out of school,” said Kellie.

Some companies visit universities one year before the graduate season. “Our screening of talent is based on strict criteria from the beginning, but some companies would try to land as much as they can at first and weed out those who prove unfit afterwards,” Miao Wei, HR Director of Alibaba Cloud, told Kr-Asia.

According to statistics by the recruiting software Boss Zhipin, salaries for AI-related data service jobs have grown the fastest this year, by up to 41.9% from last year. 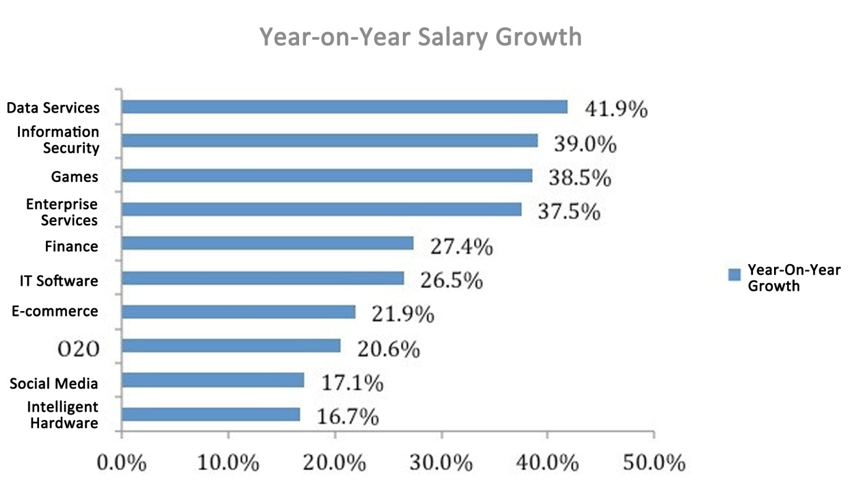 Behind the increasingly fierce competition for AI talent and the soaring salaries is a huge supply-demand gap. Based on an estimate by Alex Ren, founder of the AI-focused recruiting service TalentSeer, the supply-demand ratio for AI specialists was 1:3 in North America and a staggering 1:10 in China last year.

It’s not just large foreign companies and big names like Baidu, Alibaba, Tencent, Huawei, and Lenovo. A host of start-ups have also joined the fray. They are sparing no effort to win over talent.

After all, as the growth brought by the boom of the mobile internet slowed and investors became more cautious about their investment decisions, AI has practically become the only hotspot for start-ups and investors besides live streaming and bike sharing.

And talent means everything in an industry that’s still looking to tackle technological bottlenecks and where applications have yet to be commercialized.

The value of AI experts is increasingly being pushed up by the huge supply-demand gap.

Graduates in AI-related disciplines from decent universities have absolutely no reasons to worry about getting a job this year.

“An annual salary of  ¥250,000 (around $37852) is not really high by the standard of the AI industry,” a computer science graduate from a top-tier university said.

Roger, founder of the Internet-based headhunting company Imatch Talent, was impressed by how the cost of AI talent has surged in a decade.

When he graduated with a master’s degree in intelligent science from Peking University 10 years ago, companies were paying people like him ¥8,000 to 10,000 a month. Even an employer like Microsoft Research Asia, a top research organization in the field of AI, offered no more than ¥120,000 to 150,000 a year.

Those figures have doubled or tripled now, with even sharper increase if we count in equity and stock options.

The general sentiment in the job market about graduates in AI-related disciplines has changed dramatically in the 10 or so years as well.

When Wu Jie, a senior technical manager at Sinovation Ventures AI Institute, looked for a job upon graduation in 2004, he had to downplay his major – “AI and pattern recognition” – for fear that he might be unable to land a job if he didn’t. It was enterprise computing and Java that were popular then.

Today, however, “a deep learning-savvy engineer with, say, three years of experience can easily earn ¥700,000 to 800,000 a year at a company like Toutiao,” said a technical staff who works for an AI start-up.

Chen Jing, a senior headhunter, has observed the same trend: One can often be paid between ¥500,000 and 600,000 a year, plus stock options, if he joins a start-up with two years of experience at BAT.

“You need to have at least ¥10 million cash ready if you want to poach me,” a former schoolmate who worked at one of the BAT firms told the above technical personnel jokingly on the phone last Spring Festival. “You see, that’s how much people his level are asking if we count in both salary and the equity offered.”

It’s not just senior experts or experienced engineers. Even fresh graduates are not cheap these days

“Companies are grappling with soaring labor costs,” an industry insider told Kr-Asia. Many in the field of machine intelligence have therefore turned to second-tier cities like Chengdu, Qingdao, and Xi’an for talent.

Spiraling staff costs are making things tough for many start-ups too. For many software-focused, AI-enabled start-ups in Beijing and Shenzhen, wage costs account for as much as 50% of their total operating costs today.