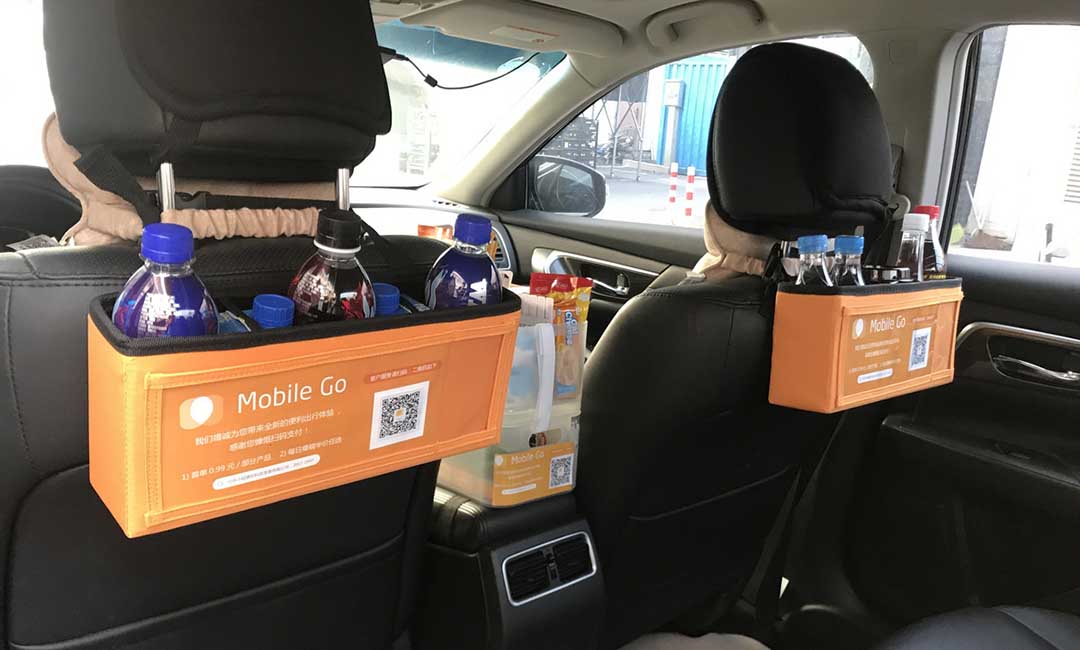 The startup has previously raised RMB 13.5 million (approx. USD 2.1 million) through a seed round from GSJ Ventures and angel investor Wang Gang. The proceeds will be used to enrich the company’s talent pool and to optimize its services and supply chain.

Mobile Go’s investors, Zhu Xiaohu, managing director of GSR Ventures, and Wang Gang, both of whom had invested in DiDi and Ofo, are hailed as China’s unicorn hunters. The recent deal marked the investment duo’s shifting of focus from sharing economy to new retail.

From the perspective of retail, the market for in-car snack bar is hardly big given the limited SKUs the business model can offer. A preliminary estimate put the market capacity at only between RMB 10 billion and RMB 30 billion (approx. USD 1.5 billion to USD 4.5 billion, based on DiDi’s announcement this year that it has 21 million drivers).

But the touted selling points of self-service snack bar that have pushed up their valuation can be used on in-car snack bars as well. These include the ability to merge online and offline retail and provide brands with distribution and marketing channels for their new offerings.

What Mobile Go does, put simply, is setting up a self-service storefront in each DiDi vehicle. Its U.S. counterpart is Cargo, which cooperates directly with Uber and Lyft and has secured $1.75 million in its latest funding round.

In China, Mobile Go is in competition with the Shenzhen-based Gogo Cheba, which claims to have initiated the business model and, as of the end of last year, have served nearly 200,000 ride-share passengers.

In a Mobile Go-enabled vehicle, passengers can pick merchandise from the canvas cases hung on the back of the front seats and sitting on the center console. Orders can be placed and payment made by scanning the QR codes on the cases.

Any authorized DiDi driver can sign up for the service after paying a deposit of 99 yuan. Mobile Go reviews the applications and sends a notice to approved drivers instructing them to go to designated places to activate their accounts, receive training and pick up merchandise.

Drivers get a cut of the sales revenue and don’t need to purchase the merchandise themselves. Inventory is managed by Mobile Go.

Teamed up with a taxi company in Hangzhou city, over 10k taxis and cars for ride-hailing are equipped with its snack bars. The startup now has approximately 100 sites for snack supply in Hangzhou.

Low operating cost, quick returns, novel business model and ease of scaling – all the selling points of self-service snack bar can be well used for in-car snack bars. In-car stores have the added bonus that no rental cost is incurred. What’s more, the two drawbacks of unmanned snack bars – high logistics cost and vulnerability to theft – are nonexistent for in-car snack bars.

Mobile Go has a simple mission: to bring convenience to passengers and earn drivers extra money. In its promotional brochure, Mobile Go paints itself as the “lubricant” between passengers and drivers, claiming to not only bring convenience to passengers, but also help drivers improve income (an extra RMB 500, approximately USD 77.95, per month, according to the brochure) and potentially receive higher ratings.

Han Zhenwei, CEO of Mobile Go, was the former director of DiDi’s private car-hailing business unit, and the investor Zhu Xiaohu is already facilitating a cooperation between the two companies. Some industry analysts therefore think that Mobile Go “seems almost like a project hatched by DiDi itself”.

Analysts close to DiDi see Mobile Go as DiDi’s efforts to branch out into the new retail market. Meanwhile, an insider has said that DiDi “neither supports nor opposes in-car merchandise vending” but is open to cooperation in some cities (such as Hangzhou). However, should anything go awry, the company will step in, the insider added.

The possible downside of in-car vending is the possibility of customer dissatisfaction if drivers go too far trying to sell the merchandise. The extra cases may also make the space seem crowded.

As for the logic behind investing in the business, as Zhu put it, “The new retail market is huge. It’s also coveted by all the industry giants and is therefore extremely difficult to enter. Unless you can build up your business quickly, there’s just no chance for you to compete against those giants.”

“That’s why we want to move fast. Mobile Go does have some unique advantages, and I hope it can scale up quickly.”